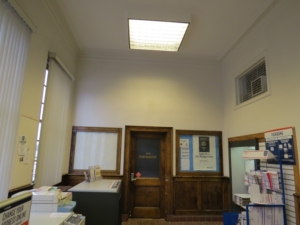 The historic post office in Barnesville, Ohio housed an example of New Deal artwork depicting the advent of airmail delivery. The Treasury of Fine Arts-commissioned mural was “completed by Cleveland artist Michael Aloysius Sarisky (1906-1974) in March 1937 at a cost of $1,296.” It was one of thousands of “New Deal” art murals created for public spaces during The Great Depression. The work is sometimes mis-attributed to the WPA or to artist Michael Loew.

The artwork is also missing. Barnesville Enterprise: “According to United State Post Office officials in Columbus, the 13′ x 5′6″ mural was taken down during an audit in 1972 and stored at a Zanesville postal facility. It disappeared in 1980, officials theorized. It was in 1972 that Barnesville became part of the Zanesville (473) region. Barnesville Post Master Dana Carpenter said the mural was taken down with the intention of being restored and returned to Barnesville. Efforts by Carpenter and other post office officials to locate the mural have been unsuccessful.”