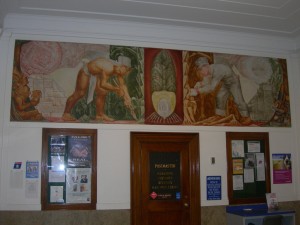 Lowell Houser painted this oil on canvas mural, entitled “The Evolution of Corn,” in 1938 with funds provided by the Treasury Section of Fine Arts.

Houser was a local Iowa artist who studied for a number of years in Mexico, where he was taken with Aztec sculptures he encountered in museums there, which accounts for this mural’s style. “In an oral history interview with the artist dated July 31, 1964, he discusses the conception and execution of the mural. Houser states that he came up with the concept that the cultivation of corn was historically Maya ‘or at least, ancient American Indian.’ He therefore decided to juxtapose a representation of the ancient cultivation of corn and the modern corn farming industry. On the one side he painted the Rain God, the Sun God, and other elements needed to make the corn grow in the Maya era, and on the other he repeated the same elements but from a Western scientific perspective. On the left, a mask of a Chac, a Rain God, and a lightning lizard are next to a dark cloud and a patch of rainfall; on the right, arrows representing water molecules (each inscribed with an ‘H2O’ shoot skyward, while an arrow labeled ‘HHO’ falls amidst a grey sheet of rain). On the Maya side, the Sun God head is an elaborate mask, while on the industrial side, a sun complete with sunspots and an absorption spectrum is surrounded by concentric rings bearing inscriptions of the chemical elements required for photosynthesis and the surface temperature of the sun, 6000 degrees Celsius. Houser indicated in his interview that he frequently sought out the advice of agricultural experts at Iowa State University in order to accurately represent different types of corn as they would have been cultivated throughout history, by the Maya and later by farmers in Iowa. This mural bears some minor similarities to one in Los Angeles, where the muralist Boris Deutsch also utilized Maya motifs and designs. In that mural, titled Cultural Contributions of North, South and Central America, Deutsch represented American Indians from both continents, and incorporated them into the fabric of the history of the Americas. Houser’s mural connects a primary industry and way of life of the local community to its roots in American Indian history, giving credit to the influences of indigenous American culture and inventions in modern-day economic activities. However, as with the Los Angeles mural, it could also be problematic in the false dichotomy it creates between American Indians and white Americans, equating one with past history and superstition, and the other with modern industry, science and reason. This tends to negate the reality that American Indian communities developed a Native science and have also adopted scientific understandings and methods for agriculture.”  (postalmuseum.si.edu) 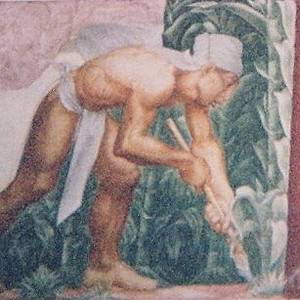