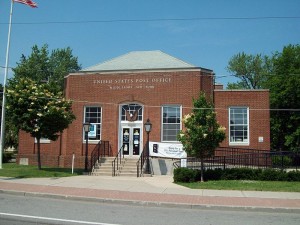 “In 1939, as part of relief efforts during the Great Depression, Congress authorized the construction of a post office building in the village, one of the last of over 200 in the state built in the 1930s. The government acquired the present site for $8,950 ($150,000 in contemporary dollars[3]) and demolished the village’s trolley stop, a church social hall and house to make way for the new building. In May 1940 a Takoma Park, Maryland, contractor began construction. The building was opened in January 1941, one of the last new post offices to be completed before Congress began diverting resources to preparing for war.[2]

Louis Simon, the last Supervising Architect of the Treasury Department, used the Colonial Revival style as he had come to do for new post offices in small towns, part of the government’s increasing standardization of its architecture. As with many of the other Colonial Revival post offices in New York, Middleport’s was part of a group employing the same design with slight variations dictated by the site.”