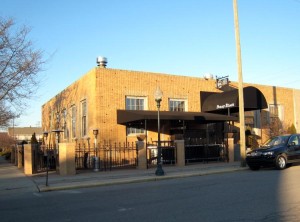 This post office was built with Treasury Department funding in 1938, and originally held an Alexander Sambugnac sculpture. In 1988, the post office closed, and the building has been occupied by several restaurants since.

From the Rochester-Avon Historical Society entry for the site:

Congressman George A. Dondero secured $39,000.00 in funding for a new United States Post Office in the village of Rochester, built in 1937-38 to replace its cramped leased quarters in the rear of the Masonic Block on Main Street. Louis A. Simon (1867-1958) was the supervising architect from the Department of the Treasury and the general contractor was the W. Searles Company of Pontiac, Michigan. The Treasury Department’s Fine Art Section commissioned a sculpture by artist Alexander Sambugnac to decorate the new building. The work, titled “Communication” was hung over the entrance to the postmaster’s office. Construction on the building was delayed in early 1938 when the AFL Building Trades Council struck the general contractor for refusing to hire union labor. Work was resumed after a settlement was reached that required all workers on the job to join the union.

Rochester’s new Post Office facility was dedicated on June 18, 1938, with a parade from the old facility on East Fourth Street to the new facility on West Fourth Street. The building was used as the Rochester Post Office until September 17, 1988, when a larger facility was opened on Old Towne Road, and the Sambugnac sculpture was transferred to the lobby of the new building at that time. The former Post Office building on Fourth Street was then sold and hosted a succession of restaurants, including 4th Street Bistro, El Nibble Nook, Senor Frog’s and the Wellington Steakhouse. The Penny Black restaurant, named for a postage stamp in honor of the building’s prior history, opened in this building in November 2010.