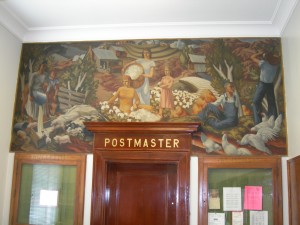 Section of Fine Arts mural entitled “Local Agriculture–A.A.A 1939” painted by Aldis Browne in 1939. It still hangs in the old post office, now used by the Board of Education.

“Browne’s Oneonta panel depicts a series of local scenes, all of them suggestions from the people of Oneonta. Also noteworthy about the Oneonta mural was the working method used by Browne. He came to Oneonta from Connecticut and painted the work directly on the wall to the delight of the local citizens, who apparently came by daily to inspect his progress. Browne reported to the Section office that he was “nuts” about Oneonta, and that the greatest debate going on was whether the jug on the wall held corn whiskey, since Blount County was dry. Included in the scheme, behind the central figures, are the specific local scenes and buildings requested by the postmaster and local citizens: to the left the city of Birmingham dam, which was located seven miles from the town, and on the right a local strip mine. Across the top are local Oneonta buildings: the Baptist and Methodist churches, the post office, cotton warehouse, sawmill, courthouse and jail. Finishing the background is a house and a covered bridge. Browne was pleased to report to the Section that the central section, comparing a terraced field to one neglected and worn by erosion was already being used by the local agricultural office to show farmers the benefits of modern scientific methods of planting. The letter written by the postmaster to verify the final installation of the panel was effusive in its praise for the Section, Browne, and the mural.”