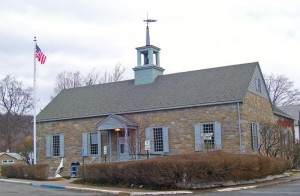 The historic post office building in Ellenville, New York was constructed as a New Deal project with federal Treasury Department funds. The building, which was completed in 1940, is still in use today.

“The building was one of many post offices in the region which were built of stone, reflecting the historical Dutch influence in the Hudson Valley…President Franklin D. Roosevelt personally approved the design. As a native of the region, he understood the importance of stone architecture and made sure that new post offices in the region were built in that style. In late 1939, villagers in Ellenville sent Roosevelt a telegram which complained that their new post office was to be brick, despite the presence of pre-Revolutionary stone houses in Ellenville’s location, the Rondout Valley.

“I will stop this brick right away!” he vowed in response, and two days before construction bidding began, he sent the project back to the drawing board. The final building combined features typical of stone houses throughout the region.

It was added to the National Register of Historic Places in 1988.”