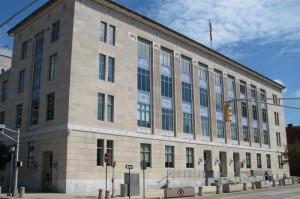 Designed by James A. Wetmore and constructed just prior the Roosevelt administration, Camden’s new post office and courthouse saw continual improvements during the New Deal era, including: the addition of lavatories on the second floor; the reinforcement of aluminum windows; and fifth-floor remodeling. The GSA documents various other minor improvements.

The GSA also describes the courthouse and post office in detail: “Completed in 1932, the U.S. Post Office and Courthouse represents an important example of 1930s Neoclassical federal architecture in the Modernist manner. A cornerstone near the entry indicates this building was completed under James A. Wetmore, who served as acting supervising architect of the U.S. Treasury from 1915 to 1933. The design itself was likely overseen by Louis A. Simon, an MIT-trained architect who served as superintendent of the architectural division under Wetmore and designed hundreds of significant federal buildings across the country. In addition to the post office and the federal courts, the original tenants in the newly opened building included the U.S. District Attorneys, U.S. Marshals Service, Prohibition Service, U.S. Army Reserve, Internal Revenue Service, and Labor Department.

Completed in 1994, a six-story courthouse annex named in honor of federal Judge Mitchell H. Cohen intersects the U.S. Post Office and Courthouse via a second-floor linkway. Its architectural treatment is sympathetic to the 1932 building.”