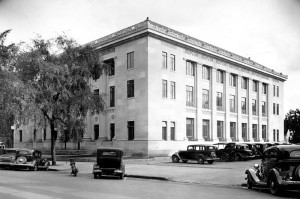 “The U.S. Post Office and Courthouse, built in 1933, is an historic United States Post Office and federal courthouse building located at 120 12th Street in Columbus, Georgia. It was designed by Atlanta-based architect William Augustus Edwards who designed nine South Carolina courthouses as well as academic buildings at 12 institutions in Florida, Georgia and South Carolina.[2] On September 29, 1980, it was added to the National Register of Historic Places.”   (wikipedia)

The building is still functioning as both a courthouse and post office.