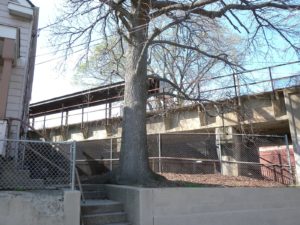 The elevated Port Richmond railway station was constructed during the mid-1930s as one link in a massive grade separation project along what was then a freight and passenger railway (the North Shore Branch of the Staten Island Railway). The structure opened Feb. 1937. Long since abandoned, the station—which is located between Park and Port Richmond Avenues—still stands.