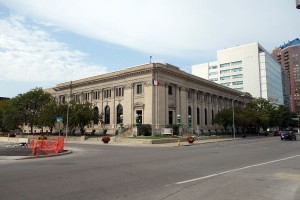 This large 1910 Treasury Department-funded building, located at Walnut St. and 2nd Ave. in downtown Des Moines, underwent an extension during the New Deal. At the time the structure was a federal building and housed post office operations. The building presently serves as the Polk County Administration Building. It was added to the National Register of Historic Places on November 19, 1974.

“The Des Moines architectural firm of Wetherell & Harrison drew up plans in the early 1930s for a large addition to the south, but no money was appropriated for it. Plans for a smaller addition were approved in 1934 and completed the following year…

The former post office building is similar in design to the Municipal Court Building across the Des Moines River, which was designed and built at the same time.[2] Both the original building and the 1935 addition are steel frame structures faced with limestone and built on a granite base. It features large semi-circular arched windows, tall smooth columns, simple entablature, massing, materials, and classical detail. The addition continues the massing and restrained design of the original building in a simplified manner that was more popular in the 1930s. The county created a promenate entranceway on the south side of the building when they renovated the structure in the late 1970s.”   (wikipedia.org)