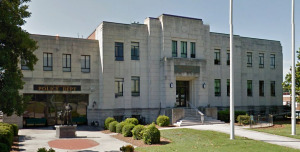 The Police Department headquarters in Thomasville, North Carolina was originally built as the community’s city hall and municipal building during the Great Depression. Construction of the Art Deco-style building was enabled by the federal Public Works Administration (PWA), which provided a substantial grant ($45,818 of the project’s $118,344 eventual final cost). Construction occurred between June 1937 and March 1938.

A National Register of Historic Places registration form discusses the building:
“The Raleigh firm of William C. Olsen and Associates, Engineers and Architects, designed the building. Albert L. Haskins Jr. was the architectural associate, and Olsen was the consulting engineer. When City Hall opened, it had ample room for the administrative department, the judicial department, the police station and jail, the welfare department, a health clinic, and the fire station. For nearly twenty years, until the County Office Building and a library building were erected, the city branch of the public library and other county agencies were also housed at City Hall. In 1991, City Hall moved from its 1938 building to the First National Bank building at 10 Salem Street. At that time, the 1938 building was turned over to the exclusive use of the police department, which it remains today.”