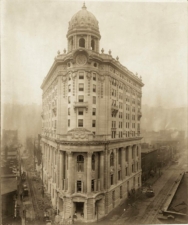 In 1934, the Public Works Administration (PWA) provided $331,000 in loans to the Pittsburgh & West Virginia (P&WV) Railway, for the purchase of three new locomotives, and an additional $47,000 for the “Purchase and installation of steel rail, track fastenings, etc.” (Interstate Commerce Commission).

The P&WV operated from about 1916-1964 and was headquartered in the Wabash Railroad Station and Building, Pittsburgh, PA, 1916-1946. Its trains operated on routes from Connellsville, Pennsylvania, to Pittsburgh, to Wheeling, West Virginia.

The P&WV was one of over 30 railroads that received New Deal funding assistance, which helped usher in an exciting era of new and bigger locomotives, streamline trains, and significant progress towards the electrification of American railroads.

The Wabash Railroad Station and Building was constructed in 1906 and destroyed by fire and demolished in 1946.

Project originally submitted by Brent McKee on May 10, 2022.

View all projects at Pittsburgh and WV Railroad HQ (4 Projects)