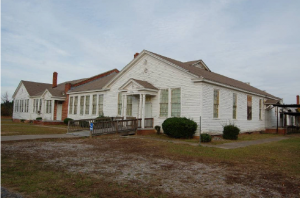 “Perry School is located on the south side of Laurel Mill-Centerville Road (SR 1436) 1.4 miles northwest of the Centerville community in Franklin County, North Carolina. Centerville is a small incorporated community of approximately 100 people that lies twelve miles to the northeast of Louisburg, the seat of Franklin County…

The school, made up of four buildings spanning the construction period 1941 to 1963, an athletic field with fencing, and brick gate posts erected by two graduating classes. In 1941, the county built the campus’s frame Colonial Revival-style school using funds from the Public Works Administration (PWA), part of Franklin Roosevelt’s New Deal, to serve African American children after a fire destroyed the Rosenwald School built on the site in 1928. Like many schools constructed with relief funds during the Great Depression, the building’s style and form draw heavily from plans issued by the Rosenwald Fund, in this case the Nashville Plan for a six-teacher school with auditorium. M. Stuart Davis, of Louisburg, served as the supervising architect and the National Youth Administration (NYA), another New Deal program, supplied a portion of the labor…

Perry School is one of a few remaining Jim Crow-era schools in Franklin County. Its significance as a rare artifact of the pre-integration era in rural North Carolina is bolstered by the lack of major alterations to the campus buildings. The school was abandoned by the county upon integration of its education system and it has remained relatively unused for over three decades.”

Project originally submitted by Andrew Laverdiere on May 6, 2014.