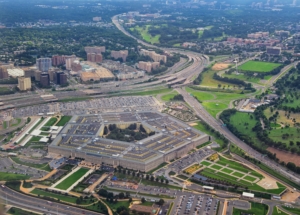 The Pentagon is America’s Department of Defense headquarters and the largest office building in the world.  It was constructed from August 1941 to January 1943 in order to centralize the administration of the U.S. armed services during World War II.

The site of the Pentagon had previously been a barren area, so the Public Roads Administration, a division of the New Deal’s Federal Works Agency (FWA), supervised a “$7 million network of highways to serve the [Pentagon] and adjacent areas” (Sunday Star, 1942).

While it may not appear to be a typical New Deal public works project, the Pentagon was built by the administration of President Franklin Roosevelt in the final two years of the New Deal decade, 1933-42. The project was conceived and overseen by General Brehon B. Somervell of the Army Corps of Engineers, who had directed the Works Progress Administration (WPA) in the New York region since 1936.

As a military structure, the Pentagon is more typical of the New Deal than generally thought – for better or worse.  That is, the two mainstays of the New Deal, the WPA and the Public Works Administration (PWA), each spent at least a half-billion dollars on military-related work (bases, airports, roads, etc.), an effort that was ramped up from 1939 on – taking 20% of the WPA budget in 1941 (Smith, 2006, pp. 204-05, 217).