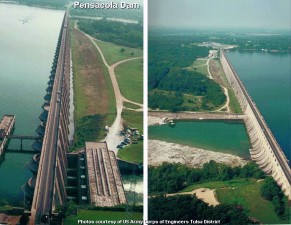 “Construction on the Pensacola Dam that formed Grand Lake in northeast Oklahoma began when President Roosevelt approved $41 million in WPA funds for the project in September, 1937. The marker at the sight of the dam had no indication of any workers being supplied with WPA funds, but an Oklahoma Educational Television Authority documentary made reference to the WPA workers at that site. On the marker, the Federal Works Agency (FWA) and Public Works Administration (PWA) are recognized. At the time of completion, WPA was officially under the umbrella of FWA. PWA had been terminated.”

–Leaning on a Legacy