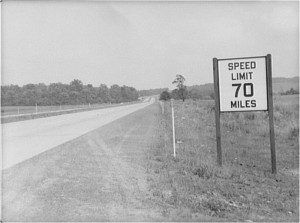 A Speed Limit 70 Miles sign along the Pennsylvania Turnpike. Taken by an employee of the Office of War Information. Source: Library of Congress Prints and Photographs Division

“America’s First Superhighway” is a toll highway running through much of Pennsylvania, and it was created with the assistance of the WPA, the PWA and the Reconstruction Finance Corporation.

“When it opened in 1940, the Pennsylvania Turnpike made history as the first limited access superhighway in the nation. Constructed across and through 160 miles of rugged ridges and narrow valleys, the Turnpike was both an engineering marvel and precursor of the national interstate highway system. What is often overlooked, however, is that had New Deal programs not financed the work, the Turnpike would not have been built until many years later, if at all…

In the depths of the Great Depression, the Commonwealth had little money to expend on such an ambitious project. Nor did the sale of Turnpike bonds offer a viable financing option, because of the risks involved in a highway project of such an unprecedented scale. As a result, the Turnpike Commission sought financing through federal New Deal programs. Initially, the Commission considered applying to the Works Progress Administration (WPA) for a grant. According to this plan, the state’s WPA office would administer the grant and directly employ and supervise the construction workers.

Private contractors quickly objected, arguing that it excluded them from the contracts, and that the WPA’s general laborers lacked the skills needed to complete so large and complex a feat of engineering. As an alternative, they proposed that two other New Deal programs, the Reconstruction Finance Corporation (RFC) and the Public Works Administration (PWA), provide the financing.

In response, the Commission and Washington adopted a plan in which the RFC would purchase $40.8 million of the state’s Turnpike bonds, and the PWA would provide a grant of $29 million. With financing from New Deal funds, the state contracted private companies to do the work, and agreed to repay the debt with tolls paid by Turnpike motorists.

The PWA grant required that the Turnpike be substantially completed by the end of June, 1940, when the agency was due to be terminated, so there was no time to lose. After groundbreaking for the Turnpike on October 27, 1938, an army of more than 15,000 laborers working for 115 contractors and subcontractors from eighteen states constructed the highway’s 160 miles, seven tunnels, and 300 structures.

After the Pennsylvania Turnpike officially opened on October 1, 1940, nearly 27,000 autos crowded the road on its first weekend…

From the standpoint of New Deal programs, the Pennsylvania Turnpike was an overwhelming success on two counts. It provided jobs to thousands of unemployed Pennsylvanians during the Depression. It also provided Pennsylvania the nation’s first modern, limited access superhighway, and served as a blueprint for the national interstate highway system begun after President Dwight D. Eisenhower signed into law the Interstate Highway Act of 1956.”     (https://explorepahistory.com) 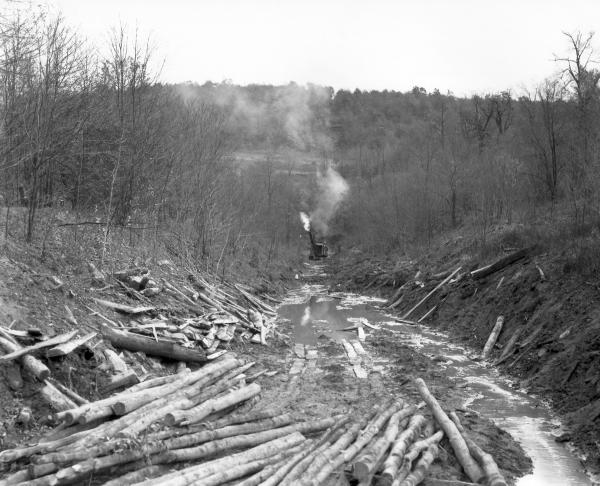 In the heart of the Great Depression, critics scoffed at Pennsylvania's ambitious proposal for a limited access, "dream highway" linking Harrisburg to Pittsburgh. But from 1938 to 1940, an army of workers funded by the Public Works Administration laid a four-lane divided highway across 160 miles of rugged terrain. Source: Courtesy of the Pennsylvania State Archives 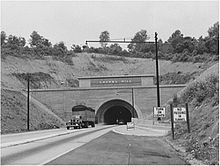 The Laurel Hill Tunnel on the Pennsylvania Turnpike. Taken by an employee of the Office of War Information. Source: Library of Congress Prints and Photographs Division

Location notes: Location marker is for a section of the turnpike near Pittsburgh. For detailed location information on the Turnpike see: https://en.wikipedia.org/wiki/Pennsylvania_Turnpike