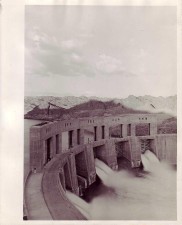 Parker Dam is diversion dam to channel water from the Colorado River into the Colorado Aqueduct traveling across the Mojave Desert to greater Los Angeles and San Diego. The later are served by a huge wholesale water agency, the Metropolitan Water District of Southern California (MWD).  MWD contracts for the water from the Bureau of Reclamation and resells it to a multitude of cities and local water districts.  Parker Dam was built by the Bureau of Reclamation from 1934 to 1938, at the same time as it was finishing Hoover (Boulder) Dam and constructing Imperial Dam on the lower Colorado River.

“The metropolitan water district includes the cities of Los Angeles, Pasadena, San Marino, Santa Ana, Santa Monica, Torrance, Long Beach, Glendale, Fullerton, Compton, Burbank, Beverly Hills, and Anaheim, with a total population of approximately 2,000,000. The city of Los Angeles obtained water from local sources and also had a supply from the Owens River 250 miles to the north, but the supply was insufficient and it became necessary to seek an additional source. The Colorado River aqueduct supplies water to the 13 cities of the metropolitan water district in sufficient amount, not only for their present needs, but also for their future growth, and for development of adjacent areas. The main features of this project are as follows: Water released from the Boulder Dam into the Colorado River is diverted at a point on the California side of the river near Parker, Arizona, and is conducted through the main aqueduct to a terminal south of the city of Riverside, at which point a storage basin has been provided to control the flow into the distributing lines for delivery to the 13 cities.

The diversion of the water from the Colorado River is made by the Parker Dam which raises the water level in the river 72 feet to the first pumping plant. The main aqueduct consists of 91 miles of tunnel, 55 miles of cut and cover conduit, 65 miles of lined canal, and 27 miles of various kinds of reassure pipe, making a total of 238 miles of aqueduct. The total pump lift, after diversion is completed by the Parker Dam, is 1,614 feet.

The Parker Dam is a reinforced-concrete structure provided with five Stoney gates each 50 feet square, which are operated vertically from the structure above the crest of the dam. The project was completed in December 1936 at a project cost of $6,825,000. Although funds were allotted as Non-federal, the project was constructed under the Bureau of Reclamation of the Department of the Interior.”
(Short and Brown)

“The world’s deepest dam lies about 17 miles upriver from its namesake, the town of Parker. The dam forms the reservoir of Lake Havasu, which is 45 miles long. During construction, workers had to dig down 235 feet through the sand and gravel of the riverbed before hitting the bedrock needed to secure the foundation. Today, only the top third of the dam is visible. Lake Havasu, the reservoir behind the dam, has a storage capacity of 211 billion gallons…

The Bureau of Reclamation built the dam between 1934 and 1938, and two thirds of its depth is below the riverbed. The dams builders aimed to drill deep into the earth to find bedrock to ensure the dams stability. Parker Dam is operated with Hoover and Davis Dams to bring water and power benefits to residents of the Lower Colorado River Basin.”
http://www.parkerareachamberofcommerce.com/community/recreation/parkerdam.htm 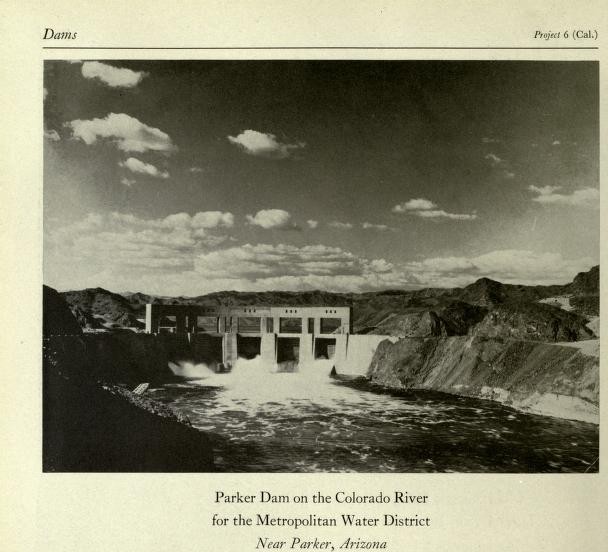 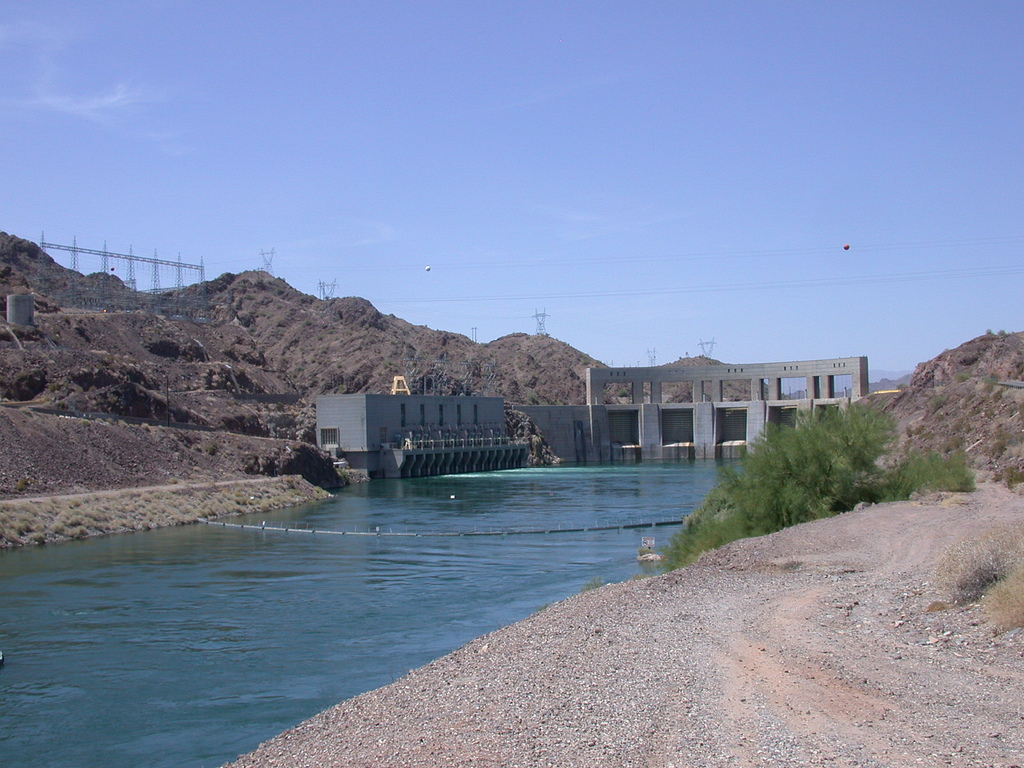 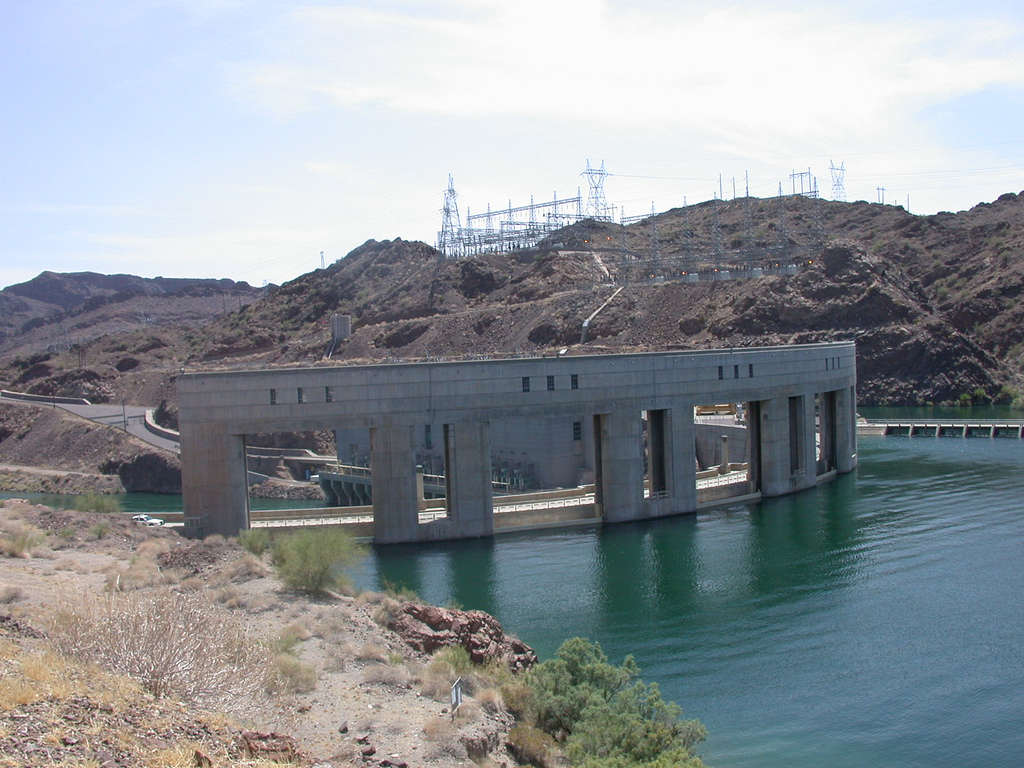 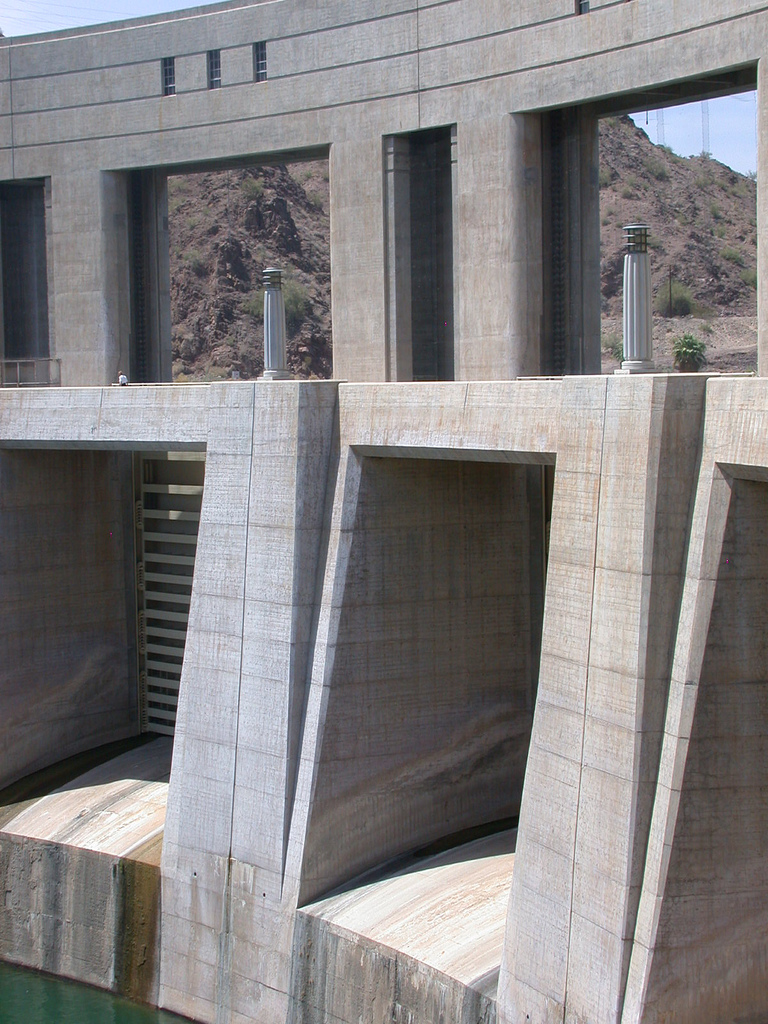 Location notes:
The dam is located on the border between California and Arizona.