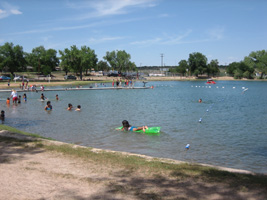 “Park Lake Historic District is located in Santa Rosa in northeastern New Mexico on the Pecos River, where the Great Plains rise up to meet the Rockies. Santa Rosa is known for its numerous natural springs that are anomalies in the surrounding desert climate. The town was founded in 1865 and, shortly after the turn of the century, the railroad connected it to El Paso, Chicago, and beyond. When Route 66 passed through Santa Rosa in 1930, the town filled with service stations, cafés, and motor courts to accommodate motorists traveling the Mother Road.

During the Great Depression, Park Lake was the site of a Federal Relief Emergency Administration project. Between 1934 and 1940, the Works Progress Administration (WPA) employed local men to construct a 25-acre municipal park focused on the lake. With its swimming pier, picnic ramada, and playing field, the park soon became the center of Santa Rosa’s outdoor recreation and welcomed Route 66 travelers who picnicked and swam in the natural spring-fed lake.

The park is designed in the typical WPA Rustic style that grew out of the Romantic and Picturesque traditions. During the social turbulence of the Great Depression, a national emphasis on egalitarian and democratic values emerged. The construction of local, regional, and national parks throughout the country was a manifestation of the desire to provide gathering places for communities to reaffirm social values and a common identity.”   http://www.nps.gov