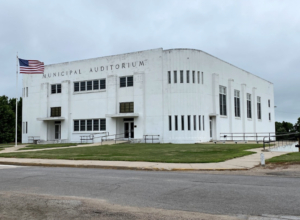 The David City Park begins long before the Great Depression of the 1930s. In 1889, Mrs. Phoebe Miles donated twelve acres to David City for a park, with the stipulation that the city pay the taxes and make improvements. During the depressed financial climate of the 1890s the city was unable to uphold their bargain, and the land reverted to Mrs. Miles.

In 1902, a group of citizens organized the David City Park Association and purchased the twelve acres. In addition to buying the land, they also planted trees and made other improvements. In 1905, the city passed a bond issue to buy the property from the David City Park Association. From time to time, additional land was added to the park through purchases and donations. Eventually the park increased from the original twelve acres to more than eighty-five.

Many of the improvements to the park were made utilizing Works Progress Administration funds and labor. Between 1935 and 1936, the city constructed a swimming pool and bathhouse, which was the first structural addition to the park, and took advantage of Works Progress Administration (WPA) funding available. In 1940, WPA grants made possible the addition of the concrete pylon entrance, which is dedicated to World War I veterans, the amphitheater, bleachers and the athletic field. Built during this time period, circa 1940-41, is the park’s caretaker’s house. It was built in a rustic style on the south side of the middle pond, and blends into the pastoral landscape of the park. Its mere existence speaks of a time when governments were in the business of “making work.” No doubt it has been quite some time since the park has had a full time caretaker that lived on site.

The most prominent building in the park is the Municipal Auditorium, which was constructed between 1941-43 and is a striking example of the Art Moderne style. As with the pool and bathhouse, the city passed a bond issue to supplement the cost of building the auditorium under the WPA program.