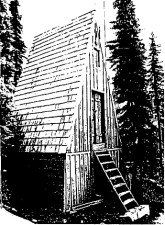 Wikipedia:
“The Paradise Ski-Tow Powerhouse was built to house a portable ski-tow system. Paradise was a significant skiing venue during the 1930s, but the Park Service did not permit a permanent ski lift facility. The ski-tow house was built in 1937 by the Civilian Conservation Corps with a steeply pitched roof similar to that of the ranger station.”

Based on a map on a National Register of Historic Places nomination form (wa.gov, .pdf page 21), Living New Deal believes the structure to be demolished.