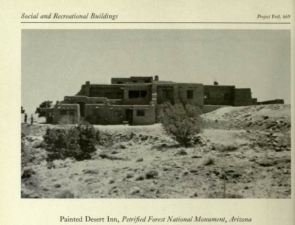 “This inn, which gives the impression of being an ancient construction of the Indians, is a modern hotel. It was built on the southern edge of the Painted Desert, 25 miles east of Holbrook, Arizona, by the National Park Service.

The building contains a dining room and a sandwich shop with kitchens, an Indian museum, a trading post for products of Indian make, a ranger’s quarters, a naturalist’s office, and eight rooms for lodging tourists. These rooms are on different levels and each has a walled and landscaped terrace.

The over-all dimensions of the structure are approximately 100 by 75 feet. Its walls are rubble masonry with a plaster finish.

“Originally built in the 1920s of stone with mud mortar, the Inn was purchased by the National Park Service in 1936 using funds from the Public Works Administration and the Works Progress Administration. Lyle Bennett, a National Park Service architect, designed a greatly expanded version of the Inn. This building was, and still is today, widely recognized as a masterpiece in the Pueblo Revival style. The Pueblo Revival style draws upon influences from early Native American pueblos as well as Spanish colonial buildings using flat roofs, rounded edges, wooden lintels and protruding vigas, and a stepped-back roofline. The irregularly shaped building was constructed between 1937 and 1940 by Civilian Conservation Corps enrollees from the Rainbow Forest camp. The adobe walls of the building are more than two feet thick. The interior rooms are filled with Navajo-inspired designs scored in the concrete floor, punched-tin light fixtures, hand-painted skylights, rounded door and window openings, and CCC-crafted furniture.” (content.library.arizona.edu)