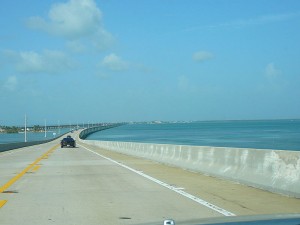 View from the Moser Channel arc on the Seven Mile Bridge in the Florida Keys.

“The Overseas Highway is a 127.5-mile (205.2 km) highway carrying U.S. Route 1 (US 1) through the Florida Keys. Large parts of it were built on the former right-of-way of the Overseas Railroad, the Key West Extension of the Florida East Coast Railway. Completed in 1912, the Overseas Railroad was heavily damaged and partially destroyed in the Labor Day Hurricane of 1935. The Florida East Coast Railway was financially unable to rebuild the destroyed sections, so the roadbed and remaining bridges were sold to the State of Florida for $640,000.”

“The F.E.C. Railway was washed up in more ways than one – it was bankrupt like Monroe County. Monroe County’s population was mostly in Key West; therefore, for the county to survive, either the railroad or the highway had to exist. The highway in the Upper Keys was not seriously damaged. The highway won and the F.E.C. right-of-way from Florida City to Key West was available for $640,000 plus some tax debts to be forgiven. The Public Works Administration approved a loan to the Overseas Road and Toll Bridge District for $3.6 million. The District in turn issued revenue bonds to be repaid with road tolls. The grand total was now about $8 million, roughly one-seventh what it cost Flagler to build the railroad, and roughly equal to the Army Corps of Engineers estimate just to bridge the water gaps.

B. M. Duncan was chosen as the District’s general manager and chief engineer to convert the railroad bridges. First purchased was the railroad right-of-way. For a vehicular highway it had to be much wider than the width of a railroad track. Sealed bids were opened on May 18, 1937 to start the project. The State Road Department constructed concrete bridges on timber piles at Tavernier, Snake and Whale Harbor channels. Groves, Lundin & Cox did the Upper Keys’ roadwork. The two moveable spans were done in-house by the District...

The highway was opened for traffic on March 29, 1938 using the old Card Sound and south Big Pine Key routes. The Lower Keys route to/from Key West followed the original State Road 4A  route along the Atlantic ocean. The only route changes were the addition from Lower Matecumbe Key to Big Pine Key which became a toll road. The official opening was July 4, 1938. Greyhound Bus Service began almost immediately as well as other distributing services. Former Florida F.E.R.A./W.P.A. director Julius Stone’s 1934 exhortation to Key West of its tourist potential was now a reality. The Gibraltar of the South had a usable vehicle artery to and from the mainland.”