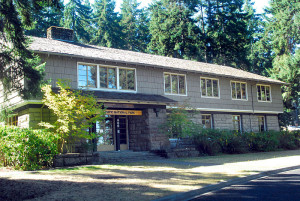 The Civilian Conservation Corps (CCC) worked to construct Olympic National Park Headquarters beginning in 1939. The Public Works Administration (PWA) provided funds for the construction of the Headquarters district, which is now listed to the National Register of Historic Places.

HistoryLink.org:
“Like national and state parks around the country, the newly created Olympic park relied heavily on the CCC and other Depression-relief agencies of Roosevelt’s New Deal for funding and labor.

A headquarters was obviously a top priority, and nearly half the $470,000 that the federal Public Works Administration (PWA) allocated to the National Park Service in 1938 for the new park was dedicated to that purpose. It took a year for the government to obtain title to the chosen 37-acre headquarters site on Peabody Heights overlooking the city of Port Angeles. By October 1939, the building plans and designs were complete and crews from the CCC began clearing and grading the site.

More than two hundred people worked on the headquarters throughout 1940. By that October, a year after construction began, the main Administration Building and the park Superintendent’s Residence were completed. Two physical plant buildings, the Gas and Oil House and Transformer Vault and Pump House, were finished later that fall. Two more maintenance buildings, the Equipment Shed/Carpenter Shop and the Equipment and Supply Storage Building, were built by June 1941, shortly before the CCC program was abandoned.”

The headquarters district is located at the very north end of the park in Port Angeles.