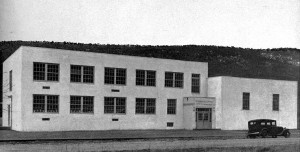 The school is no longer extant.

The city of Skagway’s website describes its now-destroyed Depression-era school:
“[The] Women’s Club raises $25,000 from Territory and $24,500 from federal Works Progress Administration to build a new school. It … [lies] behind the old one at State and 11th.”

Short and Stanley-Brown write:
“This building was constructed for grade and high school pupils from the neighboring community. In the basement are boys’ and girls’ dressing rooms, showers, and the boiler room. On the first floor are three classrooms, teachers’ room, manual training room, and a gymnasium 43 1/2 by 70 1/2 feet without a stage. On the second floor are three classrooms, a library, physics room, and administrative quarters.

The building is fireproof. The structural framing including exterior walls are reinforced concrete. The surface of the exterior walls is covered with stucco.