The former Des Plaines post office and many other post offices, after having been commissioned by the WPA to create jobs, also lent their walls to the artists of the FAP, which commissioned around 1,200 murals and 300 sculptures for the public buildings. The citizens of Des Plaines and their post office got the work of James Michael Newell, born as James Erbin Newell in 1900 Carnegie, Pennsylvania2.

Before his work in the FAP, Newell was a marine fighting in WW1 at the age of eighteen5. Afterwards, his colonel recommended him for a scholarship to study abroad in Paris, where he began to develop his skills with fresco wall paintings at Beaux Arts2. Newell then returned to America in 1913, where he was commissioned by Potomac electric company for murals in Washington D.C. offices5. In the 1930s, Newell became a part of P.W.A.P. (Public works of Art) and worked on several fresco murals, including The Death of Pere Marquette, in 1940.

The fresco painting depicts the death of Father Jacques Marquette surrounded by what appears to be travel companions and on his left, Native Americans to his right and what appears to be a Native American medicine man chanting over the diseased body. The piece is done with realistic representation of shadows and lighting, with perspective used to show the Native Americans and traveling companions in the background, while the diseased Father lies almost at the center. Despite the naming, the Native American Medicine man seems to be the focal point. It is a piece of mourning, but also a piece filled with the harmless and compassionate natives who went so far as to help a stranger.

When joined together with the other fresco mural that had been placed on the next wall over, the viewer can assume Newell is making a commentary on how our American ancestors treated the Native Americans, despite their kindness to us. The second painting is titled Conquest of The Prairie Lands and though again, there is a Native American at the center focal point, the scene is not of a peaceful passing. Instead it’s a violent battle that, according to an article by Brian Wolf, is the Black Hawk War6.

The two contrasting images work well in showing how the greed of man knows no end, despite the kindness offered by the other side, which, given the events of the Great Depression, feels like a fitting theme. After all, the greed of men was what lead to the crash. Newell’s paintings hold that subliminal message without fully pointing any fingers, but it’s getting there. As an artist under the FAP, he couldn’t go ahead and make a fully comprehensive piece criticizing the current establishment, but what he did create worked just as well.

The Fresco’s today still sit within what used to be the Des Plaines post office – though now it’s owned by Journal & Topics, and the artwork is privately owned and only viewable during regular business hours0. 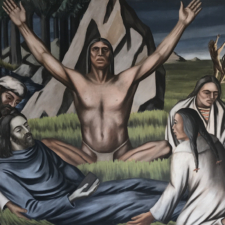