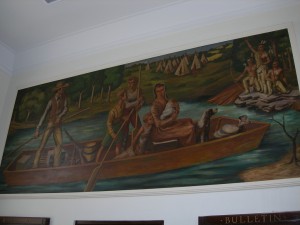 Section of Fine Arts mural entitled “Chief Tuscumbia Greets the Dickson Family” painted in 1939 by Jack McMillan. The mural still hangs in the old PO which is currently vacant.

“McMillan, a New York artist, chose the theme of his mural after visiting Tuscumbia shortly after receiving the commission. The Section had proposed that he consider using Helen Keller, but the residents of Tuscumbia suggested the arrival of Michael Dickson and his family. McMillan actually produced sketches using both themes and the Section office chose the Dickson panel as “unusually handsome in its simplicity and plastic qualities.” The mural seems to have been very well received by the residents of Tuscumbia. A long newspaper article appeared after the mural was installed elucidating the story of the Dickson family who arrived by river in Tuscumbia after fleeing the Johnson massacre in Tennessee. Chief Tuscumbia greeted them and sold them a large tract of land for $5.00 and two pole axes.” (http://www.alabamamoments.state.al.us/sec49det.html)

The post office moved out in 2003. The city purchased the building and hopes to convert it into a local museum.