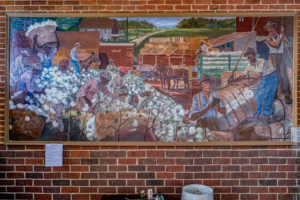 The mural “Cotton Scene” was painted for then-new Hartselle post office by Lee R. Warthen in 1941. The work was commissioned by the Treasury Section of Fine Arts.

“Warthen, of Washington, D.C., produced the Hartselle panel as the result of his entry into the War Department Building Competition. Warthen did extensive research for the panel, wrote the local postmaster, and talked with U.S. House member John Sparkman, who was from Hartselle, about the local industry and activities used in the final panel.”

In the late 1970s, the mural was moved to its current location at the Hartselle Chamber of Commerce office in the city’s historic train depot. The mural is accessible to the public during regular business hours.

One comment on “Chamber of Commerce Mural – Hartselle AL”