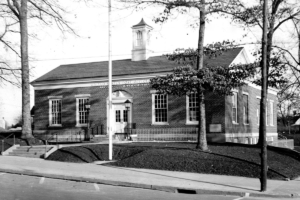 Per The Transylvania Times: “On Aug. 3, 1938 bids were received on 10 sites available in the downtown Brevard. A lot on the corner of Broad and Morgan streets was purchased from Mrs. Beulah Zachary for $4,000 on May 5, 1939. Groundbreaking took place on May 6, 1940. The Post Office began operating from the building in January 1941.”

“The building served as the Brevard Post Office for more than 30 years until postal service moved to a new building on West Main Street in early 1972.” The building was renovated and expanded, and served as the Transylvania County Library building until the library relocated down the road in 2006.