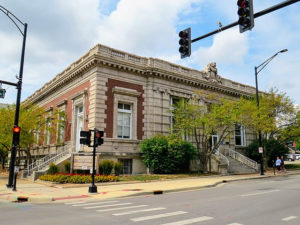 Now known as the Springer Cultural Center, what was then the main post office for Champaign, Illinois received a New Deal-era addition. Actually, the building received an addition in 1929, though it was razed seven years later to accommodate the larger construction, which effectively doubled the size of the original building, in 1936. A home behind the property was also demolished to make way for the new rear addition.

The facility was converted into a what was known as the Springer Federal Building in 1966. Listed to the National Register of Historic Places in 1976, the building was deeded to the Champaign Park District in 1991.