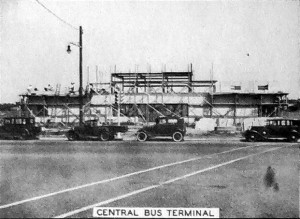 This former WPA bus terminal is no longer extant, however it was a landmark of the community for a long time. A 1939 WPA Federal Writers’ Project described the then new terminal as follows:

“The Municipal Bus Terminal, River St. opp. Demarest Pl., is a modern one-and-one-half-story structure of white-faced brick and glass. Designed by Spencer Newman and opened in 1937, it was financed jointly by the city and the Works Progress Administration. The severity of the functional style is relieved by effective planting on the approaches. The terminal serves most buses operating in the Hackensack section.”   (http://www.getnj.com)

A recent book looks back on the former terminal:

“The municipal bus terminal on River Street in Hackensack was a state-of-the-art building. … Comfortably heated with a cafeteria, it was a landmark in its day. Nowadays, it has been replaced by … the Heritage Diner.”   (Sellarole et al.)