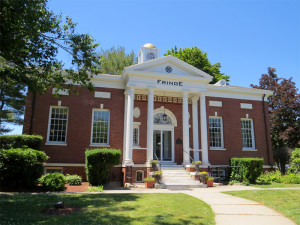 Multiple New Deal agencies assisted in the improvement of what was then the library for West Hartford, Connecticut. [This is not to be confused with the new, and current, library, for the town, which was itself constructed as a New Deal project.] The former library is now privately owned.

In 1933 the federal Civil Works Administration (C.W.A.) funded the labor for landscaping improvements and “the undertaking of odd jobs of carpentry, plumbing, electrical work and painting.”

In 1934: “With FERA labor and town “make work” help, it has been possible during the year to undertake a number of projects of various kinds. At the main library the exterior of the building and several rooms were painted; a bicycle rack was made; new electric lights were installed in the lower stack room and electric plugs and switches throughout the building; old and worn-out plumbing was replaced; a much needed sink added in the work room, and 100 feet of new water pipe was laid; a new sidewalk was put in and the old walk repaired; the landscaping begun the previous year was continued; several supply closets and racks were built and thirty-six sections of shelving were constructed. Numerous small jobs of repairing were also taken care of.”