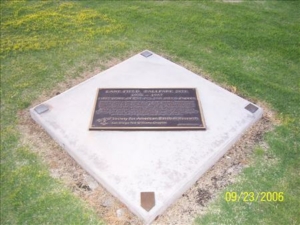 “Lane Field is a former baseball stadium located in San Diego, California. The ballpark was home to the San Diego Padres of the Pacific Coast League from 1936 through 1957.

The ballpark was located in downtown San Diego, at the end of West Broadway near the waterfront. Broadway bounded the park to the south (first base). Its other two close bounding streets were Harbor Drive (third base) and Pacific Highway (right field). There were various buildings to the north (left field) between the ballpark and Ash Street.

Before it was called Lane Field, the stadium began its life as a U.S. Navy athletic field in 1925. Two years later, football bleachers were added. The field also had a track, used for motorcycle and auto races. When Bill “Hardpan” Lane relocated his Hollywood Stars from the Los Angeles area in 1936, he arranged for the Works Progress Administration to rebuild the venue as a baseball park…

Lane Field was finally abandoned by the Padres following the 1957 PCL season. The next season, the team shifted to the new Westgate Park, located in San Diego’s Mission Valley area.

The site of Lane Field is now Cruise Ship Parking, a parking lot between Pacific Highway and Harbor Drive which is used by cruise ship passengers. It is located approximately halfway between the museum ships Star of India and USS Midway. A plaque at the corner of Broadway and Pacific Highway commemorates the ballpark.”