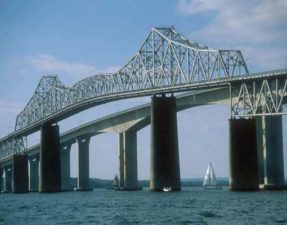 Old Jamestown Bridge, with its replacement in the background, ca. 2006.

The Old Jamestown Bridge, which spanned the west passage of Narragansett Bay, was constructed as a New Deal project: the Public Works Administration (PWA) supplied significant financial assistance for the then-$3 million project, which opened for traffic in 1940. The structure, which was demolished in 2006, has since been replaced. The structure bore a “Federal Works Agency // Public Works Administration” plaque.

Art in Ruins: “Planning for a bridge at this location began as early as 1920 and was spurred by the financial woes of the Newport Ferry Company. The noted bridge engineering firm Parsons, Klapp, Brinckerhoff and Douglass, which also designed the Cape Cod Canal Railroad Lift Bridge, won the engineering contract along with Waddell and Hardesty. The bridge was completed in 18 months on an accelerated schedule. In 1940 the bridge cost $3,002,218, almost $118,000 under budget. The bridge was important during World War II as a link between area military bases including the U.S. Naval Training Station in Newport and the Quonset Naval Air Station in North Kingstown, as well as several coastal defense batteries.”