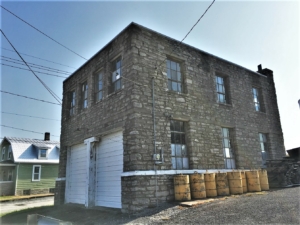 The Old Fire Station in Chester, Illinois was constructed in 1935 and served as a firehouse until 1961. The decommissioned building is presently used for storage.

While some documents are unable to distinguish the particular New Deal agency responsible for the construction—Public Works Administration (PWA) vs. Works Progress Administration (WPA)—PWA records make no mention of such a project, and the documentation is consistent with WPA specifications.

NRHP nomination: “The two-story rough-cut stone building has a footprint of about 28 by 36 feet and was constructed using recycled stone from a razed building that was located on a street near the Mississippi River…. Apart from the bay doors, the building has had few alterations.”