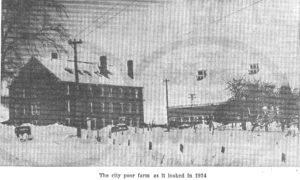 “During the winter of 1934-35, Augusta city officials called upon the ERA to assist in repairing the City Farm. This called for a tremenduous [sic] amount of material and labor but an agreement was made by the two parties whereby the City was to furnish the material and the ERA the labor. The project was started January 24, 1935 with a small crew of men and within a few days more men were added to make a crew of 21. This crew remained on the job until it was finished on June 6, 1935.
The labor cost of this project was approximately $5,386.15 compared with a material cost of approximately $5,000. It used 5,100 man hours.
The structure consists of a large basement and four floors, all of which were deteriorating rapidly. The entire building was so infested with cockroaches and bedbugs that a special machine had to be hired along with an operator to exterminate these insects. All beds and bedding including blankets, mattresses, pillows and sheets were destroyed and replaced.
A new foundation was built under part of the building, and the ceiling reinforced, to keep the kitchen and range from falling into the basement.
The work on the ground floor consisted of painting and papering the living room. This was the only room papered. The rest being plastered and painted 3 coats of paint. Other rooms on the ground floor having general repairs were the main dining room, employees dining room, kitchen, toilets, supply room, and 3 bed rooms. In addition to this work the crew made the tables for the main dining room and the kitchen, installed a new sink, set up a new range and built a new pantry complete with cupboards and drawers for storing food.
At the rear of this building on the first floor a new and modern laundry was constructed with concrete flooring and the crew installed the new washing and drying equipment. An old shed at the rear of the building was modeled into a store and well stocked. From this store the town truck delivers food daily to the city’s poor.
On the second floor, nine bed rooms and bath rooms were completely built over and 1 room was converted into a shower bath.
The third floor received about the same as the other two floors. Repairs were made to nine rooms and a new bath with a concrete floor installed.
A brief summary of the work done on this building follows: Forty-two rooms received new ceilings, walls plastered, 3 coats of paint, and hardwood floors installed in 39 rooms. The 3 other floors were of concrete. Hardwood floors laid in 4 halls. Old plumbing taken out and new plumbing installed. New steam pipes and radiators. Twenty tons of plaster were used to plaster the rooms. Installed new shower baths, kitchen range, sink, and equipment in laundry room. A complete new wiring job was done throughout the entire building and new lighting fixtures installed. All stairways were torn out and replaced by new ones. Each stairway was encased and painted. new linen closets were built on each floor. Twenty old doors were taken down and replaced by new ones. Approximately 75 new windows replaced the old ones and all received a good paint job. One side of the roof shingled.
Very few people realized the condition of this building and the unsanitary conditions and the inmates were living in, but the labor has made possible one of the finest City Farms in the State.”

The location is now the site of the City Public Works Dept.