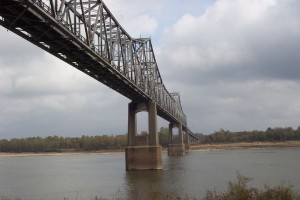 Picture of the bridge from the Arkansas side.

The US 82 bridge between Greenville, Mississippi and Lake Village, Arkansas was constructed to increase access between the two states to benefit economic development in the Delta. It was dismantled and replaced in 2011 due to increased river traffic, which resulted in numerous hits to the bridge over the years, and increased vehicular traffic which resulted in traffic control issues due to the narrow lanes and lack of shoulders. The Reconstruction Finance Corporation lent $2.55 million toward the cost of the original bridge. WPA funds were secured in 1938 for the remainder.

The Public Works Administration (P.W.A.) was also involved with the project, according to a bridge plaque.