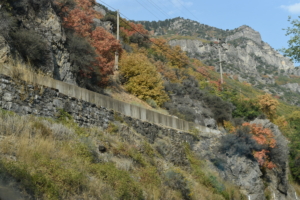 The Ogden River Project provides irrigation water for 25,000 acres of land along the Wasatch Front around Ogden UT, as well as supplemental water for the City of Ogden. The anchor of the project is Pineview Dam in Ogden Canyon and the resulting reservoir created from the waters of Ogden Creek.

Pineview Reservoir feeds a system of distribution canals to water users on the plains in and around Ogden.   The system is fed by the 5-mile long Ogden Canyon Conduit running down the north side of the canyon wall.  From there, a 25-mile long Ogden-Brigham Canal runs north toward Brigham City and the 7-mile South Ogden Highline Canal feeds land south of Ogden city.

The Ogden River Project was officially approved by President Roosevelt on November 16, 1935, but funding had already been allocated by the Public Works Administration (PWA) in 1933 for the use of the Bureau of Reclamation, and the first stages of construction began in Fall 1934.

The Civilian Conservation Corps (CCC) set up Camp BR-12 near Huntsville in 1934 and carried out the initial clearance of the reservoir site.  They soon began work on the downstream canals. Most important, they replaced the old 72-inch wooden conduit down the canyon with a new 75-inch wood stave conduit (and some steel pipeline, as well, it seems).

The Ogden-Brigham Canal and South Ogden Highline Canal were built by private contractors for the Bureau of Reclamation.  They were well underway in 1937 when the Ogden River Project was dedicated, but final work on those and 5.2 miles of concrete lined distribution canals was done from 1938 to 1941 with help from the CCC, which also built holding pools along the route.

A 42 inch pipeline from Pineview dam delivers water to the Ogden City filtration plant located downstream.  Water from the Ogden Canyon Conduit also goes through the Utah Power & Light penstock to their Pioneer generating plant before heading off to the various canals and users.

Most of the original canal work appears to be still in place and functioning. The Ogden-Brigham Canal runs through North Ogden and then along the old Bonneville  Lake shoreline north through Willard to Brigham City.  The canal and its several small reservoirs are clearly visible on Google satellite view.

The South Ogden Highline Canal runs through an eye-catching siphon strung across the mouth of Ogden Canyon; the original siphon was not replaced until 2015.  The aqueduct then dips underground, feeding several reservoirs and apparently ending in a reservoir on the Weber State University Campus.

The Ogden Canyon Conduit can still be clearly seen in the lower portions of the canyon. The unique wood stave conduit was documented for the Historic American Engineering Record (Study Utah 51) in 1968. How much of it has been replaced since by steel pipe is unknown to us. 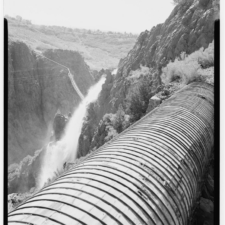 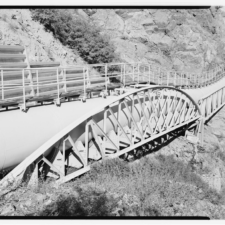 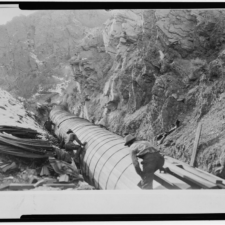 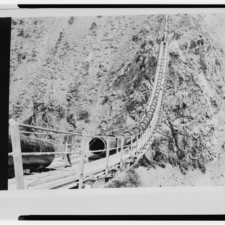 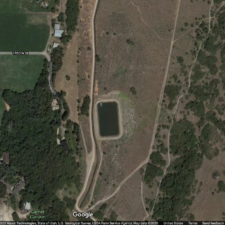