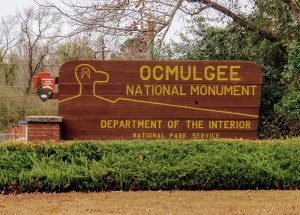 Numerous New Deal agencies had a tremendous impact on the development of Ocmulgee National Monument, the site of pre-Columbian southeastern settlement dating back millennia.

“The largest dig ever conducted in this country occurred here at Ocmulgee and the surrounding area. Between 1933 and 1936, over 800 men in Roosevelt’s Works Progress Administration (WPA), Civil Works Administration (CWA), Federal Emergency Relief Administration (ERA & FERA) and later the Civilian Conservation Corps (CCC) excavated under the direction of Dr. Arthur R. Kelly from the Smithsonian Institute. Kelly was the only archaeologist at the Ocmulgee camp and conducted evening training courses for the men. Hundreds of thousands of artifacts were discovered including pottery, pottery sherds, metals, arrowheads, spear points, stone tools, pipes, bells, jewelry, seeds, bones, etc. –some of which is on display in the Ocmulgee National Monument Museum or stored in the museum curatorial. This dig helped piece together a timeline of people who lived on the Macon Plateau between 12,000 BC and 1800 AD. Each of the major periods was represented here at Ocmulgee. All together 2.5 million artifacts were found with 800 men working at one time.

NPS.gov:
“Large-scale archeological excavations at Ocmulgee Old Fields in Macon, Georgia began in December of 1933. The site was declared a National Monument in 1936. In 1937 the National Park Service along with U.S. Congressman Carl Vinson, General Walter Harris, and Dr. Charles C.Harrold completed a list of needed development projects including construction of a museum, restoration of archeological features, access roads and parking, tree planting, and fence construction – all to include the detached Lamar Site where a levee was also needed. Camp NM-4, Company 1426 (now re-classed by the National Park Service as NP-5), was established at Ocmulgee National Monument in May 1937 under the direction of Dr. Arthur R. Kelly as Project Superintendent and Gordon R. Willey as Senior Foreman Archeologist. The Camp developed rapidly with over 200 unemployed youth ages 17 –23 years old living in four (4) army style barracks with accompanying mess halls, kitchen, latrine, educational and recreational halls, and an infirmary, along with a garage and shops. Life in the Camp was not all work, with no play, as evidenced by the recreation hall with pool and ping-pong tables, and outdoor volleyball and basketball courts, and a softball field. Each enrollee received $30.00 monthly of which$25.00 was allotted for family support and sent home. The CCC youth were extensions of, and in some cases, worked simultaneously with, other depression era relief agencies. Included in the massive archeological excavations and rehabilitation of the site were the Civil Works Administration (CWA), the Federal Emergency Relief Administration (FERA), and the Works Progress Administration (WPA). The CCC was administered through the War Department and the enrollees wore army style uniforms and maintained their Camp in military fashion with somewhat less emphasis on discipline than regular army. Individual assignments and training included cooking, serving in the archeological laboratory located in the Macon Auditorium, and later serving as guides for park visitors. However, most of the young men served as laborers in the rehabilitation of the excavation sites and on construction projects.

“Major construction projects included: building their own camp, restoring the 1000 year old Indian Earthlodge, beginning work on a 40,000 square foot museum and administration facility (not finished until after World War II), constructing and paving two miles of roads including culverts and curbing, building parking lots, and preparing trails including a bridge between the museum and Earthlodge that has become a local landmark. Additional laborious details at the detached Lamar Site (two miles south of the main site and including two large mounds) involved levee construction along with cleaning-up after the excavations. The clean up, or rehabilitation effort, included the non-dramatic, backbreaking work of re-filling excavation ditches. The young men labored in the heat of summer and in the cold of winter. The bleak days of the depression and the loneliness of family separation were blended into cheerful days and new comradery through necessity and youthful optimism. Concrete was hauled in wheelbarrows, logs were moved by human power, and even stone quarried without modern equipment. At the Earthlodge, enrollees puddled clay in large pits, mixed in straw, and then applied the mixture to the inner concrete wall to simulate the Indian architecture. The public was admitted to this historic structure on November 11, 1937 after the CCC ‘boys’ completed the steel walkway and installed electric lights. Park projects continued throughout 1940. A wooden fence was installed around much of the park. At the entrance, a building resembling the design of old Fort Hawkins (1806) was added for the CCC visitor guides. Work continued on the large protective shelter over the Funeral Mound. 1941 saw some of the CCC enrollees duties transferred to nearby Camp Wheeler which would provide infantry training during the coming war. On December 7, 1941 one era ended and another began. Lives changed. In early 1942 only 40% of the original CCC members remained at Ocmulgee National Monument. All emphasis was being placed on the war effort and work ended at the park in February 1942.”