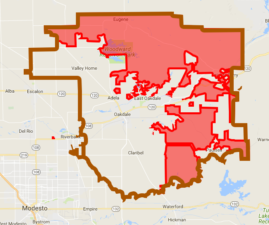 The OID was formed in 1909 for the purpose of delivering irrigation water to the agricultural lands within its boundaries. Geographically, the District encompasses parts of Stanislaus and San Joaquin Counties. Currently the District operates and maintains over 330 miles of laterals, pipelines, and tunnels, 25 deep wells, and 48 lift pumps to serve local customers. The District encompasses an area of approximately 80,900 acres, with an additional approximately 77,700 acres within its sphere of influence. Urban areas in the District include the cities of Oakdale and Valley Home located in Stanislaus County.