“The Leeds CCC camp opened in October 1933 under the direction of the Dixie National Forest Service on the site of an existing ranger station. Stone was recovered from the neighboring silver mining ghost town of Silver Reef to build the CCC administrative buildings.

A large crowd attended the dedication of this camp on November 11, 1933. The American Legion conducted the program and the Dixie College Band played the music.

John Shipley was the commanding officer. Some of the other officers were Captain McBride, Fat Larson (a slim man), Dorsey, Verle Newbold, and Ken Carnahan. Al Dobruskey ran the big Caterpillar for the Forest Service and Dill Pickles (a nickname) was a mechanic.

Leeds, a town of less than 200, more than doubled with the opening of the camp. Two hundred young men from all over the country resided and worked at Camp #585. Townspeople were reluctant at first about the impact the camp would have on local life, but support grew as the CCC camp clearly provided a boon to the struggling economy of Leeds. The community became even more accepting as the men worked on local projects, like a swimming pool, in their off-duty hours.

The Leeds CCC crews built the road to Oak Grove and completed the Oak Grove Campground, which included a tennis court, wading pool, and playground.

The Leeds CCC Camp was closed in 1942, and most of the wood frame buildings were removed by 1950. These included the barracks buildings which were to the west past where the freeway now runs. Abner Perry from Cedar City bought the barracks and hired Reed Cox, Klingensmith, and Glenn Beal to dismantle them. He hauled the materials to Cedar City to build other buildings.

Construction of the I-15 freeway in the 1970s reportedly destroyed several remaining historic structures.

The remains of the CCC camp were recorded as an historic archeological site in 1989 as part of a survey for cultural resources near 1-15. The resulting form for site 42WS2394 lists eighteen features (buildings, terraces, roads, trash sites, etc.). Several of these features are located outside the boundaries for a nomination which focuses on the most significant historic features included in the property to be donated to the Leeds Historical Society.

The Leeds CCC Camp Historic District was added to the National Register of Historic Places (#1993000062) on March 4, 1993. Today only the four stone administrative buildings remain on 2 1/3 acres which make up the historical site. You may tour them today as they are just inside these monuments. The majority of the camp buildings, like the barracks, camp mess hall, and warehouses, were wooden and have not survived.

This is the only CCC Camp in Utah with buildings still standing.” 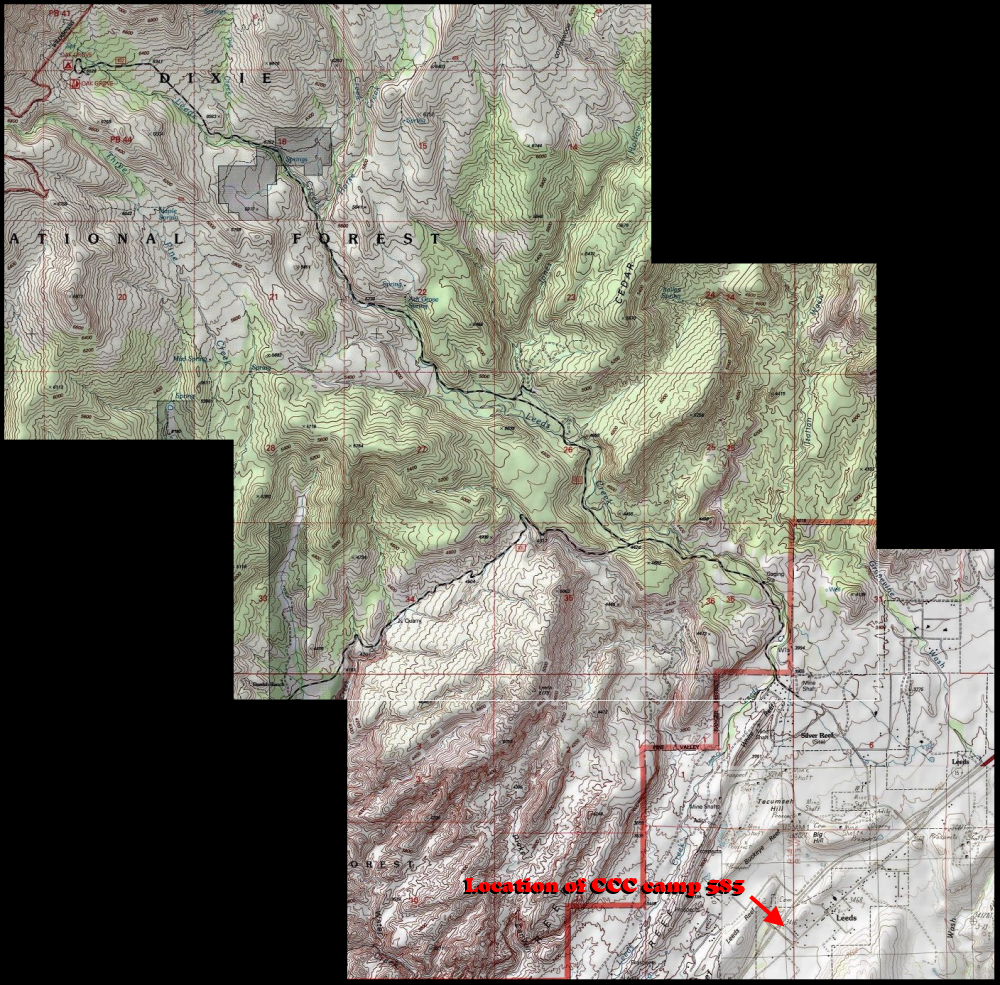