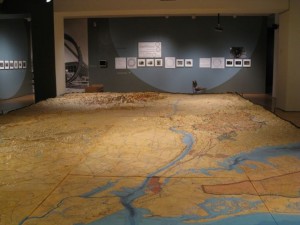 This WPA relief map of the NYC Water Supply System is now on display in the Queens Museum of Art. The information plaque displayed with the map reads:

“For the 1939 World’s Fair, city agencies were invited to produce exhibits for the New York City Pavilion (now the Queens Museum of Art). The Department of Water Supply, Gas and Electricity (a New York City Department of Environmental Protection predecessor agency) commissioned the Cartographic Survey Force of the Works Progress Administration to create the magnificent relief map of the New York City water supply system and watershed that you see in this room.

Work began in 1938 and a team of map builders toiled over the map with an immense depression-era budget of $100,000.00 (roughly $1.5 million in today’s dollars). At 540 square feet the planners could not allocate enough space for the map in the city pavilion resulting in its elimination from the Worlds Fair. Ten years later, it made its first and only public appearance at the city’s Golden Anniversary Exposition in Manhattan’s Grand Central Palace. After decades in storage, the 27 piece map was in desperate need of conservation. Through collaboration between the New York City Department of Environmental Protection and the Queens Museum of Art, the plaster and wood relief map was sent to McKay Lodge Fine Arts Conservation Lab in Oberlin, Ohio for conservation. In time for its 70th anniversary, and the 100th anniversary of the inauguration of the Catskill System construction, the map has been restored to its original brilliance and has arrived at its intended home in the New York City Building where it will remain on long-term loan.”