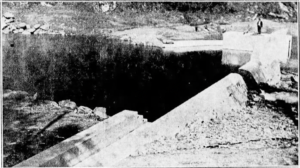 Two New Deal work relief programs: the Civil Works Administration (CWA) and Federal Emergency Relief Administration (FERA) were responsible for the construction of a dam impounding the North Fork Reservoir (a.k.a. Burnett Reservoir) north of Black Mountain, North Carolina, part of a massive project to improve the water supply for Asheville. Work at the site also included construction of a chlorination plant and caretaker’s house for said. The status of the structures is unknown to Living New Deal.

With completion of the North Pork water line project by forces of the North Carolina Emergency Relief administration recently, the supply of water from the North Fork watershed has been doubled.

The Intake dam is of the gravity type and is 235 feet long between end wing walls. It has an average height of 14 feet. The spillway is 90 feet long, this being considered ample for the worst floods. A 10-foot section of the spillway Is depressed to provide a constant flow of water so that fish can go over the dam, being helped in their ascent by a concrete pool built on the down stream side of the dam directly below the depressed section. The dam is built of cyclopean concrete.

The chlorine unit, which is modern in every respect, was purchased by the city and is housed in a structure built of hollow tile and stucco. The house of the caretaker of the chlorination plant is built of native stone.” 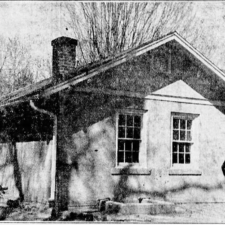