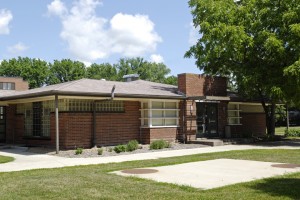 The newspaper of what was then the North Dakota Agricultural College, The Spectrum of April 14, 1939 reported:

“Student health fees, accumulating over a period of several years, will help finance the building of a $25,000 student health center on the campus, announces President Frank L. Eversull. Plans have been made for the project to be accomplished through WPA assistance. Tentative plans call for $10,000 of the student health fund to be augmented by $15,000 WPA money, although final arrangements have been on the WPA appropriation. Dr. Eversull adds that WPA officials have promised help in securing definite approval of the project…

Following modern architectural style the health center will be designed so that it can be added to in the future if necessary. Drafting the plans is Paul Jones of the architectural department. It is believed the one story, 60 by 40 foot structure, will be built northwest
of Ceres hall. It will have a full basement and will house a waiting room, secretary’s office, boys’ ward for six patients, a girls’ ward of the same size, an isolation ward for four, a doctor’s office and consultation, a diet kitchen and nurses’ quarters. At present the health center is maintained in a suite of four rooms in the Men’s Residence Hall.”

Building plans did indeed go ahead as planned: “Construction on the Health Center began in August 1939, but took until the spring of 1940 to finish due to a labor shortage in the Works Progress Administration (W.P.A). When finished, the building was a one-story structure with a basement measuring 60 feet long and 40 feet wide. T. L. Hanson, head of the architecture department, and Paul Jones, Fargo architect and former NDAC faculty member, drew up the plans. The total cost for the building was $25,000 with the money coming from a $1 student contribution each term to the health fund and money coming from the W.P.A.”

The building is now known as the C. I. Nelson Building.

Project originally submitted by Andrew Laverdiere on May 30, 2014.