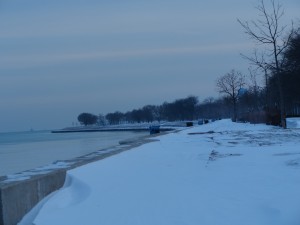 Prior to being a sun-bathing destination, the area now known as the North Avenue Beach was a final resting place for thousands of Chicagoans. In 1835, Chicago authorities set aside land for two cemeteries, one on the south and north sides of the city, according to Feb. 28, 1931 Chicago Tribune article. The cemetery held more than 3,100 burial lots and extended on either side of Clark Street and North Avenue. Although the remnants of those individuals were supposed to removed in 1865, about 200 bodies were left, some of which were discovered Feb. 28, 1931 as workers were doing construction in Lincoln Park at the Dearborn Parkway & North Avenue intersection.

The completion of the North Avenue Beach was one of the projects in Lincoln Park funded through the Works Project Administration. The project cost a reported $750,000 (approximately $11,537,671.06 in today’s dollars), and the beach and beach house was opened July 31, 1941. The beach—at that time—accommodated 75,000 people, and the area was more than 870,000 square feet of sand. The beach had 30 lifeguards, 8 drinking fountains, a loudspeaker system, five light towers, and underwater bulkheads to prevent the lake from washing away fill-in sand.

Today’s beach house, which was opened in 1999, is slightly larger than the original structure. The original beach house, designed by Chicago Park District architect Emanuel Buchsbaum, was demolished after suffering from severe deterioration. The current beach house was designed by Wheeler Kearns Architects and contains approximately 22,000 square feet with a lower and upper deck for beach-goers to see the city.