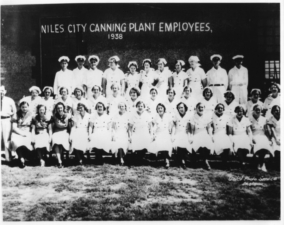 The Niles City Canning Plant was converted from an abandoned syrup factory in 1938, with construction continuing into 1939, by the city of Fort Worth and the Works Progress Administration (WPA). The building itself was constructed in 1911 and was originally the City Hall for Niles City, a small town that developed around the Fort Worth Stock Yards Company. In 1922, Niles City was annexed by Fort Worth, which was attempting to gain tax revenue. The building was vacant for several years and then it was used as a syrup factory for four to five years afterward.

Work to convert the building began in 1938 by the City of Fort Worth, with the WPA presumably joining the city in 1939 to support the remainder of the project with labor. The project was financed. The project was part of a broader movement in the city to employ WPA workers. The Niles City Canning Plant canned vegetables and redistributed the products to growers (40%), the WPA(30%), and to the city (30%). Additionally, it served a second purpose in employing women amidst the war effort. This plant, while only employing around 50 individuals, the majority were women. A picture of employees, taken at the plant’s inception, showed only one male employee. At the plant’s close, a mere seven men were employed alongside 43 women.

The Niles City Canning Plant closed on Tuesday, August 20, 1940, in response to a quota reduction for canned products for the Fort Worth area, indicating that the plant was also intended to directly serve the heightened needs of war time. After a few years of vacancy, the plant was rented out to become a “war duplex” in 1943 to house wartime workers. After the war, the building was vacant, except for sporadic periods of being used as housing, until demolished in 1975. After its destruction, the location was replaced with a parking lot.