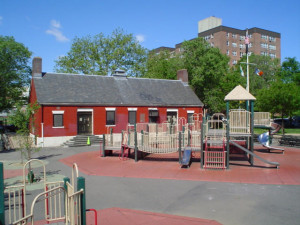 NYC Parks describes the origins of this playground in Queens: “This public space was acquired by the City of New York by consolidation on January 1, 1898, and transferred to the Department of Parks in 1917. It was not developed as a playground until 1934-35. The playground opened on August 9, 1935 with slides, swings, sandbox, seesaws, benches, comfort station, tool house, and cherry and hawthorn trees.”

On April 3, 1937, the Department of Parks announced the further completion at this site of “a new recreation building of brick construction,” containing “a boys and girls’ comfort station, a mother’s room and play-room.”