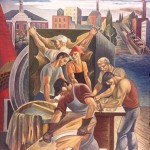 Michael Lenson painted “History of Newark” with funding from the WPA Federal Art Project. It consists of 8 panels, each approx 6′ h x 4′ w.

“[Mr. Lenson] moved to Newark and applied at the W.P.A. office on Halsey Street … Soon, Mr. Lenson was designing and executing murals for the state W.P.A. program. He went on to become assistant state supervisor in charge of the other muralists in the agency.

By the time the federal W.P.A. closed in 1943, Mr. Lenson had created six murals and supervised the execution of 15 more in New Jersey by other artists. He also made one mural in West Virginia.”

“Three of Mr. Lenson’s New Jersey murals still exist, all in Newark — the age-darkened ”History of the Enlightenment of Man” at Weequahic High School, 279 Chancellor Avenue; the recently restored ”History of Newark” in the council chambers at Newark City Hall, 920 Broad Street; and ”The Four Freedoms,” an imposing work at the Fourteenth Avenue School, 186 14th Avenue. A fourth mural, ”Mining,” has also survived in a post office in Mount Hope, W. Va.”