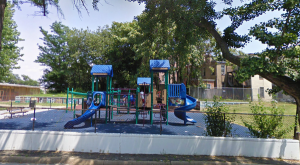 In 1936, the Washington Post reported that Works Progress Administration (WPA)  crews had done work on the New York Avenue Playground.  This would have been part of a  nearly $1 million WPA program of park and playground improvements in 1935-36.

It is unclear whether the existing field house dates to this period, but it shares a general form with other New Deal playgrounds in the area. In 2012, the playground and recreation center were renovated.