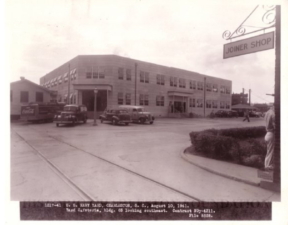 “The Charleston Naval Base provided defense for the United States from its formation in 1901 to its closure in 1996. Originally designated as the Navy Yard and later as the Naval Base it had a large impact upon the local community, the tri-county area and the entire State of South Carolina. Hundreds of thousands of people were employed, two hundred fifty-six vessels built, thousands of others supported and millions of dollars poured into the area’s economy.”

“The first dry dock, the largest on the east coast, was completed in 1907. In 1909, the powerhouse to supply electricity to the dry dock pump was ready and the first ship was placed in dry dock. Other improvements such as officers’ quarters, the five main shop buildings, an administrative building, several piers, a dispensary, railroad facilities, a sewer system, and streets were completed and placed in service between 1903 and 1909. ”

“The Depression was hitting Charleston full-force when good news arrived in 1933. Charleston was to be designated as a new construction yard, thus creating the need for greater facilities and a much larger work force. The Yard became active in repairing, altering, converting and building of vessels. Coast Guard cutters and tugs, destroyers and a Navy gunboat were built.

Production increased and by 1939 there was a $3.5 million expansion and improvement program underway employing 1,800 previously out-of-work civilians. President Roosevelt came to Charleston twice to check on the Yard’s modernization. Charleston benefited from defense spending and employment at the Yard climbed to 2,400. With a severe shortage of housing in the area to accommodate the increased work force, three apartment projects were constructed to house the new workers and their families. First to be completed was the Tom McMillan Homes in March of 1941, followed by the Ben Tillman Homes and the George Legare Homes in August 1941.”

The website historicCharleston.org has 6 photographs depicting PWA and WPA projects at the Navy Yard.

Following the base closure in 1996, the Charleston Naval Complex Redevelopment Authority/Naval Base Museum Authority was formed to utilize the facility and maintain the museum. 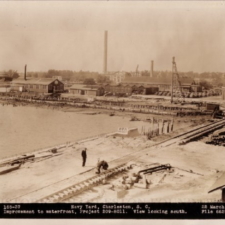 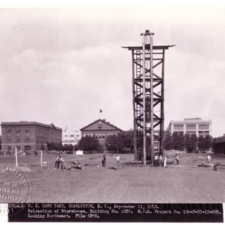 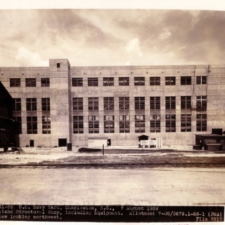