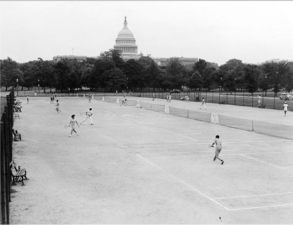 One element of the National Mall project was the building of tennis courts on the north and south sides of the Mall between 3d and 4th streets.  It seems that these were replacements for previous courts on the mall itself, which were demolished in the overall reconstruction of the Mall in the mid-1930s (Sunday Star, 1935).  This appears to have been part of a thorough rethinking of the National Mall, from a functional park with pools, tennis courts and storage facilities, to the scenic centerpiece of the monumental city.

The earliest mention of new courts declared that, “Rollers, like giant ants, smoothed out the tennis courts on the Mall, and government clerks thronged to them after office hours.” ( Sunday Star 1935). Another article mentions of four new courts in the Mall at 4th Street, among others built around the city (Evening Star 1938).

The website “Histories of the National Mall” shows that there were ten courts on the mall between 3rd and 4th streets by 1940.  It further notes that, “These courts were probably segregated when they opened, but by 1948 they were designated ‘open’ to any race.”

The Mall tennis courts lasted until 1972, when they were removed for the National Gallery of Art’s east wing.